I spot it in the cooler next to the other Lagunitas beers.  I’ve heard of this seasonal brew from the California beer company, but I’ve never tossed one down my grocery hole.  I place a six pack on the counter, pay, and race home to try the legendary Lagunitas Sucks.

I pry open the lid, raise the bottle to my face, and announce, “I’m going back to the store to buy the rest of their six packs.”

My wife: “What, you haven’t even tried it yet.”

Anna leans in and breathes in the piney hop assault wafting from the bottle.  “Let’s go,” she says.  (God, I love this woman.)

Back at the store, I see there’s one more six pack in the cooler.  Frantically, I muckle onto the beers and place them on the counter.

The cashier gives me a curious look, “Weren’t you just here?” 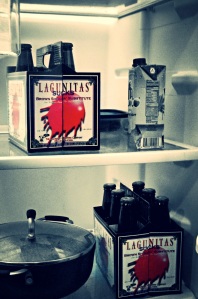 Back at the homestead with our two six packs of Lagunitas Sucks, Anna and I giggle over how good this beer is.  Giggle?  Absolutely.  I’m unabashedly giddy over this beer.

Placing the Lagunitas Sucks up to your face, you know this is going to be a brilliant beer.  As stated earlier, there’s an atomic hop explosion pulsating from the bottle.  If you’ve ever homebrewed and placed a freshly opened package of hop pellets to your nose, then you understand the refreshing bouquet of citrus and pine I’m talking about.  This beer has it.  Naturally, the next step is to take a healthy swig.  The taste experience does not fall short of the aroma.  Though this beer is heavily hopped, it’s not obnoxiously bitter.  However, it does deliver the pleasant IPA experience of lingering piney bitter on the back of the tongue.  The beer pours surprisingly clear, and for a brew high in alcohol, the boozy taste doesn’t overwhelm the clean hops and malt.

Bold statement: Lagunitas Sucks is the best nationally available IPA.  In addition to the six packs, I was also able to get a few pints at a local watering hole.  If I’m able to buy six packs and drafts of this beer 3,200 miles from the brewery, anyone should be able to acquire Lagunitas Sucks.  I can think of no other beer this good that is so readily available while it’s in production.

I say this with a deep sense of urgency, Go out and find Lagunitas Sucks while you can!  It’s a limited release, and I don’t know when it will be off the shelves.   Stock up, friends.  And don’t mind the queer looks from cashiers when you find yourself back at the store after your first taste.