To some people, the title of this blog might be blasphemy.  Like when Mick Jagger sang through those big puffy lips, “I know, it’s only rock and roll, but I like it.”  A lot people were up in arms.  Only rock and roll?!  How can Mick be saying this only five years after Woodstock?  How?!

Well, easy, because it is only rock and roll.

And that’s where I’m at right now with beer.  Whoa, I know, I’m the guy who keeps touting this as the greatest beer renaissance in the history of humanity.  I still assert that this is the most wondrous time on earth to drink beer, but as I imbibe on the most brilliant beers being brewed in the U.S. right now, I keep coming across a certain sanctimonious attitude that I think is the wrong way to approach something as simple as beer. 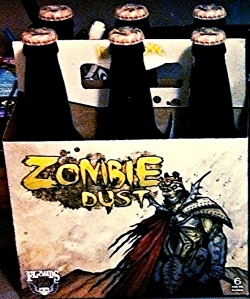 Here’s an example.  Recently, I was lucky enough to have some Zombie Dust come my way. (Thanks again, Jeremy!)  When it arrived, my friends and I treated every bottle like it was nectar poured straight from the good Lord’s teet.  I found myself thinking, Only drink one a day and make sure it’s at this temperature in this kind of glass.  Shit, I was tempted to wear the white gloves those guys don when handling Lord Stanley’s Cup.

Guess what, at the end of the day, it’s just beer.  It’s made from water, grains, malt, hops, yeast, and, of course, love.  Those are some pretty humble ingredients.

Maybe what I’m asking is that we not do to beer drinking what wine connoisseurs have done to wine.  Let’s have some dignity.

My friend who works for a wine distributor told me they have a nickname for buyers who over-think every bottle of wine they order: cork dorks.

Let’s not be the beer equivalent of cork dorks.

In a lot of ways, though, the hop head might just be beer’s cork dork.

Cork dork is to wine as hop head is to beer.

I’m a hop head.  Guilty as charged.  And I love talking and writing about the beer making process and what hops were used at what time of the boil.

But what I’m asking for, ladies and fellas, is that we don’t over-think our beer drinking. It’s just beer drinking.  You know what, let’s call it what it truly is: beer drinkin’.  Let’s lose our pretensions along with that refined ‘g’ at the end of ‘ing’ words.

I’m going to make three promises to myself and the world right here on the internet where everyone can hear me.

Promise One: If I have a Heady Topper (or near equivalent) in my fridge, I’m going to drink it when I feel like it.  Even if my palate doesn’t feel fully cleansed and the beer is below 65 degrees.

Promise Two: The next time I see someone drinking a Sam Adams, I’m not going to berate them and explain that it’s not really a microbrew.

Promise Three: I’m going to stop trying to sound like the smartest beer drinker ever when I’m in a beer conversation.  Instead of talking, I’m going to fill my mouth with beer.  Delicious beer.