I’ve figured it out.  It came to me while I was enjoying a glass of Zombie Dust this past weekend.  It all seems so clear now I feel foolish to have missed it before.

Here it is: the key to making world class beer is keeping the taste notes simple and graceful.

Here’s another way to think about it, it’s like when a great musician plays a brilliant solo, he doesn’t play a lot of notes just because he can.  Rather, the solo is brilliant, because the few notes he does play are the right notes. 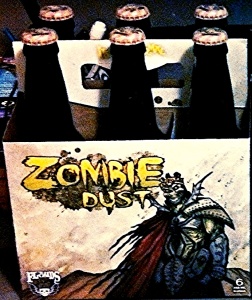 None of these beers are over-the-top, punch-you-in-the-face beers.  When I started writing about beer, I figured most of the highest ranked brews in the world would be big beers with bold flavor spectrums.  This isn’t the case, and I believe it’s because when a beer tries to be too big, it just ends up being a mess with muddled flavor and tons of alcohol.

This beer is all about the citra hop.  When I made a clone batch in my kitchen, the recipe called for eight ounces.  Now that I’ve finally had a glass of Zombie Dust (thanks, Jeremy!), I can see that Three Floyds has figured out how to let the citra hop shine at the forefront of the Zombie Dust experience.  The citra hops impart a pineapple and grapefruit citrus freshness to the beer that helps create its world class character.  Their hop schedule during the boil and dry hopping stages have created the perfect balance of bitter, flavor, and aroma.  Instead of going big with the other ingredients, Three Floyds dialed back on the grains and malt, so what you have is the exact right amount of sweetness just below the citrusy bitter.  The beer also has an impeccable body and mouth feel reminiscent of Pliny the Elder.

Cheers to Three Floyds for giving the citra hop the right stage to shine on!

From the description above, it’s clear that Zombie Dust isn’t a beer where the brewmasters threw everything they could find into the brew kettle.  Not at all.  Zombie Dust has a refined taste.  A reserved brilliance.  The difficulty with doing something where the boldness comes in the simplicity, of course, is that there’s no where to hide imperfections.  And really, this beer has no imperfections that my palate can discern.  Like Miles Davis playing a four note solo, each note needs to be the right one or it just sounds rudimentary.  There’s a fine line between simple-genius and simple-stupid, and Zombie Dust, like many of its brethren atop the beer world, has figured out the alchemy of simple-genius.