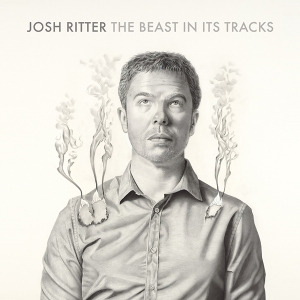 Let’s get something clear right off: Josh Ritter is the best singer/songwriter on the scene these days.  Best is a slippery term, but I stand behind my diction.  Argue as you probably should with such a bold statement, Ritter is the man who gave us “The Temptation of Adam” (Historical Conquests) and “The Curse” (So Runs the World) — two of the strangest, most vivid love songs I’ve heard in…well, ever.  And listening to the first three songs on Animal Years consecutively is life altering.  Go do it.  Seriously.  Good, now tell me you didn’t just experience sonic nirvana.  If I were president, my first order of business would be to invent, then appoint Josh Ritter to, the position of Songwriter Laureate.  There is no other songwriter I would want documenting the tragedies and triumphs of these United States.

Now that we’ve established my devotee status, you can imagine how giddy I was when I heard that Ritter’s seventh album was due out this month.  Giddy?  Yup.  Giddy.  When I discovered that The Beast in its Tracks was a breakup album, I was further intrigued.  Great writers, regardless of genre, use language to lucidly express life’s confusion.  Or, as W.H. Auden put it, “Poetry is the clear expression of mixed feelings.”  For Auden’s theory at work, just listen to Blood on the Tracks, Dylan’s breakup album.  (Not sure how I feel about the similar title Ritter chose for his breakup album.)

Big thanks to NPR’s First Listen for putting The Beast in its Tracks on their website in its entirety a week before it was available for purchase.  Upon my first headphone listen, I was struck by the naked production.  Ritter’s work with bandmate/producer Sam Kassirer over the past few albums made me expect something with the same layered sonic vein.  Though it still has the textures and subtleties of a Josh Ritter album, The Beast is something different.  Thick organ sounds and distorted guitars aren’t as present as past records.  Ritter puts his words at the forefront, often backed only by acoustic guitars.

The album has a couple arcs threaded through the thirteen songs.  The first track, “Third Arm,” clocks in at a mere fifty-six seconds.  (The song title suggests the post-divorce disorientation Ritter’s dealing with.)  The songs become longer as the album progresses, finally swelling to four and a half minutes by the fourth track.  Building the length of the songs as the album advances has a nice effect.  It kind of miffed me at first, but like side B of Abbey Road, I began to be moved by the song fragment opener.

Another arc is the evolution from lost love to new love.  If the lyrics are truly autobiographical, then it seems like Josh has a new lover.  How do I know this?  Because he tells us about it in the song “New Lover.”  This is a clever, misdirection song.  He begins by building up his old lover with lines like, “I feel like a miser, I feel low and mean / For accusing you of stealing what I offered you for free,” and “I don’t know who you’re with these days, might be someone new / and if you are I hope he treats you like a lover ought to do.”  The song makes a sharp turn at the chorus: “I’ve got a new lover now, I hope you have a lover, too.”  Boom.  Take that, ex-wife.

Moments like this litter the album, keeping it from simply being a him-against-her breakup album.  There’s a moving on in these songs that’s refreshing.  It keeps the album from feeling too heavy-hearted — though I figured the joy-filled songwriter couldn’t stay mopey too long anyway.

After many listens, “Hopeful” is the song that sticks out as the gem.  God, the lyrics are so raw.  He’s a man bearing it all.  The song is honest to the point of being almost uncomfortable.  We see the breakup laid bare.  Case in point: “She kept telling me about the good things I deserved / That I wanted somebody I’d mistaken for her / But one look in my eyes and she’d know she was wrong / So she wouldn’t look back at me until she was gone.”  Painfully vulnerable.  The song’s production, instrumentation, and arrangement are fresh as well.  In contrast to the first three songs, there’s more than acoustic guitars here.  Overall, the song’s a winner.

A Josh Ritter zealot though I may be, I don’t believe that the man can do no wrong.  In his catalog there are some clunkers, and this album has some sloppy lines.  In “New Lover,” Ritter sings, “There are things I cannot sing for the fear of sour notes.”  Personally, I think he could have put that philosophy to work in some of these songs, because the album does contain some sour notes lyrically.  But fuck it, remember the poems you wrote when your heart was broken?  I’m sure, like the ones I’ve written, they were not models of Auden’s “clear expression of mixed feelings.”  I’ll let you find the sour notes and judge for yourself.

This album marks a new landscape for both Josh Ritter the writer and Josh Ritter the man, and both will have to pick up the pieces and live in the wake of divorce.  The Beast in its Tracks is a strong effort from a man trying to make sense of the confusion of human relationships and, like the majority of his work, it’s worth your listen.

One thought on “Album Review: The Beast in its Tracks, Josh Ritter”