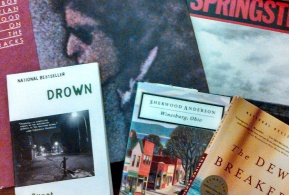 In the summer of 2007 on a campus in the Bread Loaf Wilderness in Ripton, Vermont, I inadvertently incited an argument between two writers.

While discussing Edwidge Danticat’s The Dew Breaker in a fiction writing workshop run by the patient and at times clairvoyant Patricia Powell she noted that Danticat’s book was a novel that could teach aspiring writers a good deal about craft.  I interjected that The Dew Breaker was actually not a novel.  The previous summer, I explained, I’d read the book with one of her colleagues in a course entitled The Contemporary American Short story.

“David Huddle,” I said, “called the text a book of connected short fiction—making the distinction that it was not a novel.”

Patricia looked at me and smiled. “Well,” she said in a soft Caribbean accent, “I’ll have to set David straight.”

Later that evening I attended a cocktail party in a nineteenth century inn where the two writers discussed, in a jovial manner I should add, their arguments.

“Each story has its own form, it’s own logic separate from the rest of the stories,” David said in his southern drawl.

Patricia responded, “David, the novel tells the story of a Haitian family’s struggles in coming to America.  The emotional impact of the book can only be experienced as a novel.”

I sipped my gin and tonic marveling at the scene I had created.  In the end, both writers agreed to disagree and floated away to other literary and not-so-literary discussions hanging in the humid air, and I was left in the conversation’s wake wondering, So what is it: a novel or a book of connected stories?  What, then, is the difference between a novel and a book of connected stories?

Being a musician, I started thinking about the relationship between a book of connected stories and a concept album.  Rock and roll albums are not told as novels since they most often appear as separate songs placed together on a record (or at least they used to be before the digital revolution).  Sgt. Pepper’s Lonely Heart Club, commonly considered the first concept album in rock, seems to me now as a work of connected stories.  Or Van Morrison’s Astral Weeks as a record whose songs inform one another, but can survive on their own when taken away from the rest of the album’s tracks.  In this light, I began to see that a book of connected stories, like the concept album, has stories that can stand alone as ‘singles,’ if you will, but spark and resonate in a new light when experienced together.

The answer, then, to the quandary of what a book of connected short stories actually is, can be found in Red-Headed Stranger, Nebraska, Blood on the Tracks, and rock and roll’s other great concept albums.